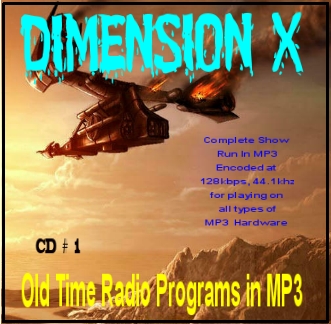 Strange that so little good science fiction came out of radio; they seem ideally compatible, both relying heavily on imagination. Some fine isolated science fiction stories were developed on the great anthology shows, Suspense and Escape. But until the premiere of Dimension X -- a full two decades after network radio was established -- there were no major science fiction series of broad appeal to adults. This show dramatized the work of such young writers as Ray Bradbury, Robert (Psycho) Bloch, Robert Heinlein, Isaac Asimov, and Kurt Vonnegut. In-house script writer was Ernest Kinoy, who adapted the master works and contributed occasional storied of his own.

Dimension X was a very effective demonstration of what could be done with science fiction on the air. It came so late that nobody cared, but some of the stories stand as classics of the medium. Bradbury's "Mars Is Heaven" is as gripping today as when first heard. His "Martian Chronicles" was one of the series' most impressive offerings.

That's pretty thrilling. In the middle of tales about atomics and ro-bits and missions to the moon.

I love listening to these tales. Some of them are really stark.
Reviewer: Ripcord - favoritefavoritefavoritefavoritefavorite - November 15, 2013
Subject: Dimension X authors
Isaac Asimov, Robert Bloch, Ray Bradbury, Fredric Brown, Robert A. Heinlein, Murray Leinster, H. Beam Piper, Frank M. Robinson, Clifford D. Simak, William Tenn, Jack Vance, Kurt Vonnegut, Jack Williamson and Donald A. Wollheim. Ernest Kinoy and George Lefferts adapted most of the stories and also provided original scripts.
http://en.wikipedia.org/wiki/Dimension_X
Reviewer: Dungarees2 - favoritefavoritefavoritefavorite - December 1, 2010
Subject: An excellent radio series
Dimension X and X Minus one, are probably the two best science fiction shows to be on what we now consider old time radio, in part because they were were well written, well crafted, well performed, as well as being first. Lesser shows could have reduced science fiction to a footnote in the history of old time radio. Yes, there were occasional weak episodes, but that was more in the sense they were weak against the high standard they set for themselves, not weak against other science fiction series. The writing for both series wasn't as strong as, say, Frontier Gentleman or Gunsmoke, or possibly The Great Gildersleeve, Jack Benny or Barry Craig because those shows had a continuing cast which you could relate to. And, there was an overlap of episodes. But, for those with the adventure of mind and imagination that only science fiction can bring to mind, travel to space and the future, even as dated as some of the shows may be, they were almost as good (and to many people, better) than curling in a corner with the latest paperback or monthly magazine of featuring the same story.

The bad part of science fiction, of course, is that ever since 1969, no one can ever write about what it will be like to land on the moon... Still, these stories and performances stand the test of time.
Reviewer: madasaboxoffrogs - favoritefavoritefavoritefavorite - September 30, 2010
Subject: Dimension X
Loved it down loaded half of them at the Library and rusged back the next day to get the rest. I must up load “Journey into Space” also from the 50's and at 20 episodes per story it seems to happen in real time in “The Red Planet” they get to Mars until episode 10!

As Dim X is a weekly show how come Wheaty's Week lasts for three episodes? Listening to them one after another it felt like the Wheaty people where trying to take over my mind – eat them at 7, still spewing at 11.
Reviewer: fleabag2 - favoritefavoritefavoritefavoritefavorite - September 23, 2010
Subject: Future tense?
I admit that I don't have all of these episodes, but it's funny when you stop to think about it, that the producers of this 1950's radio program considered that "future tense" (at least in some of the episodes that I have) only extended as far ahead as the 1990's (this is 2010), and many of them have some sort of apocalyptic-gloom-and-doom ending as their theme, none of which, of course, has happened in real life. Having said that, it sounds sort of like all this talk about "global warming", although I don't claim to be a science expert.
Reviewer: nousforseti - favoritefavoritefavoritefavoritefavorite - August 23, 2010
Subject: great series
So far I've gotten through about half the episodes, and I can safely say that this is an excellent series. I specially like episode 13. It's an almost perfect prediction of the internet and modern computers.

Uploaded by OTRRArchive on November 28, 2006